While there is conflicting speculation as to the origins of tarot, the most satisfying, academically

thorough, and spiritually resonant treatment I have encountered is that of Margaret Starbird’s in ‘The Woman with the Alabaster Jar’. Starbird was raised, and to my understanding still is, a practicing Catholic. She began an academic research project early in
her career to disprove the theory of the Holy Grail as representative of the Davidic bloodline, descending from Jesus through his marriage to Mary Magdalene.

Instead Margaret felt she proved the opposite; that indeed Mary Magdalene was Jesus’s wife, and that the bloodline, and in a bigger sense, the teachings of the original Church of Christ or Church of Love were suppressed by the church which had eradicated the divine feminine from its lineage and its foundation. She is now a spokesperson for the return of the divine feminine to spirituality, and to the Catholic Church; for a religion that honours sexuality as a sacred communion of the masculine and feminine.

How does this relate to the tarot? Starbird gives years of study and academic analysis to the artwork of the day, including that of the most historic deck of tarot available. According to Starbird the tarot, like the more conventional artwork of the day (in the sense of what we consider artwork today i.e. painting, sculpture, etc.) encompasses a ‘secret language’ expressing the original teachings of Christ and the Church of Love, and depicting the story of the ‘disappearance’ of the bloodline, and its prophesied resurfacing at the time of the restoring of the divine feminine to humanity. 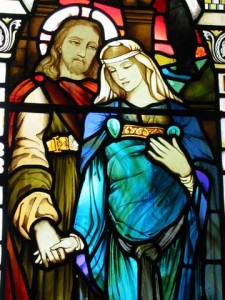 There is historical evidence of tarot being used as a divining tool by the 1700’s, and this is predominantly how it is used today. The essence of a divining tool is that it functions as a language through which we speak with the divine. It is not intended to replace your Source, God, Buddha, Goddess, Universe or Great Spirit, but rather to connect you with your deep intuition, your higher self, the divine source or God as it is expressed through you, or speaking in terms of energy, your feminine or yin principle. The feminine energy in all of us is that which receives, intuits and nurtures. The male or yang is that which wills, takes actions, and reasons. In ancient times we may have spoken and practiced this language more readily. Today (although this is transforming) the language of the diving is considered ‘esoteric’, as we have, in a cultural sense (in some areas more than others) been governed by the mind.

The biggest concern I am asked about as far as religion and tarot card reading is concerned is regarding the idea that messages from the tarot replace the word of God, or the message of God. Rather, the tarot is intended to access our ‘God’ given intuitive faculties, just as we access may our ‘God’ given gifts in life to be of service to humanity or the collective whole.

When we enter a tarot reading by a tarot reading professional, we allow the tarot reader to use his/her likely more developed feminine energy or intuition, to understand the messages coming from our intuition, that we are not able to hear clearly without this guidance either because we have blocked or forgotten how to hear this wisdom. This may be for myriad reasons. There is a reason that tarot readers go for tarot readings from other tarot readers: because even those of us who are very connected with our intuitive can experience the ego or mind getting in the way, especially when we are dealing with major life challenges.

Whether we consider it in the context of the lost teachings of Christ as ancient art or artifact, or sacred text, the tarot offers both a study of the ancient wisdom of our spiritual evolution as a species, and a language with which we connect with and speak this inner wisdom directly, bringing us healing, re-connection, and personal insight.